Whiteout Magazine: Does snowboarding have a diversity problem?

Does snowboarding have a diversity problem?

An interview with Michaela Schmid

This story is by Nytaï Aidlin, and was published on Whiteout on March 30, 2022. You can view the original HERE. 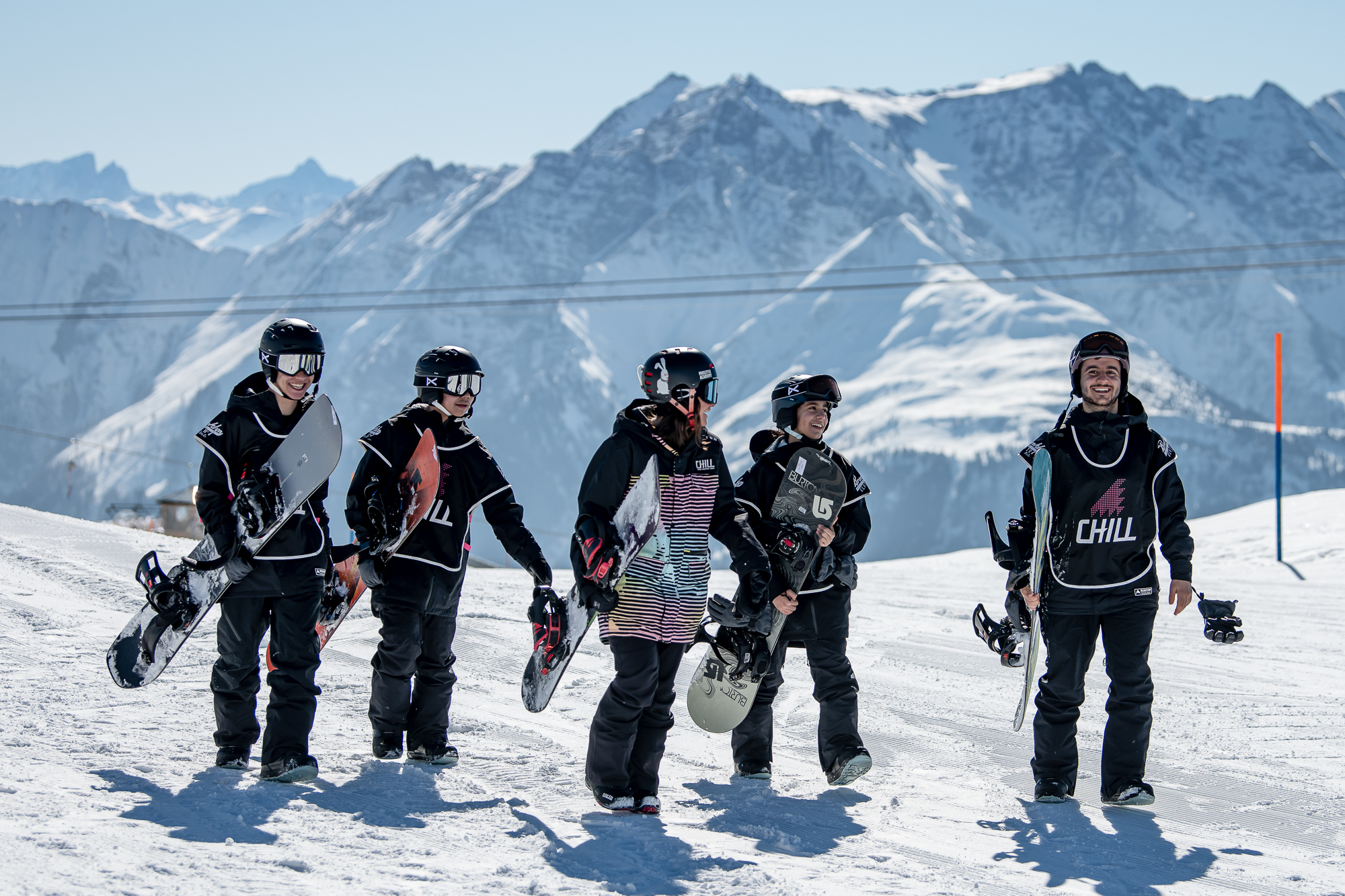 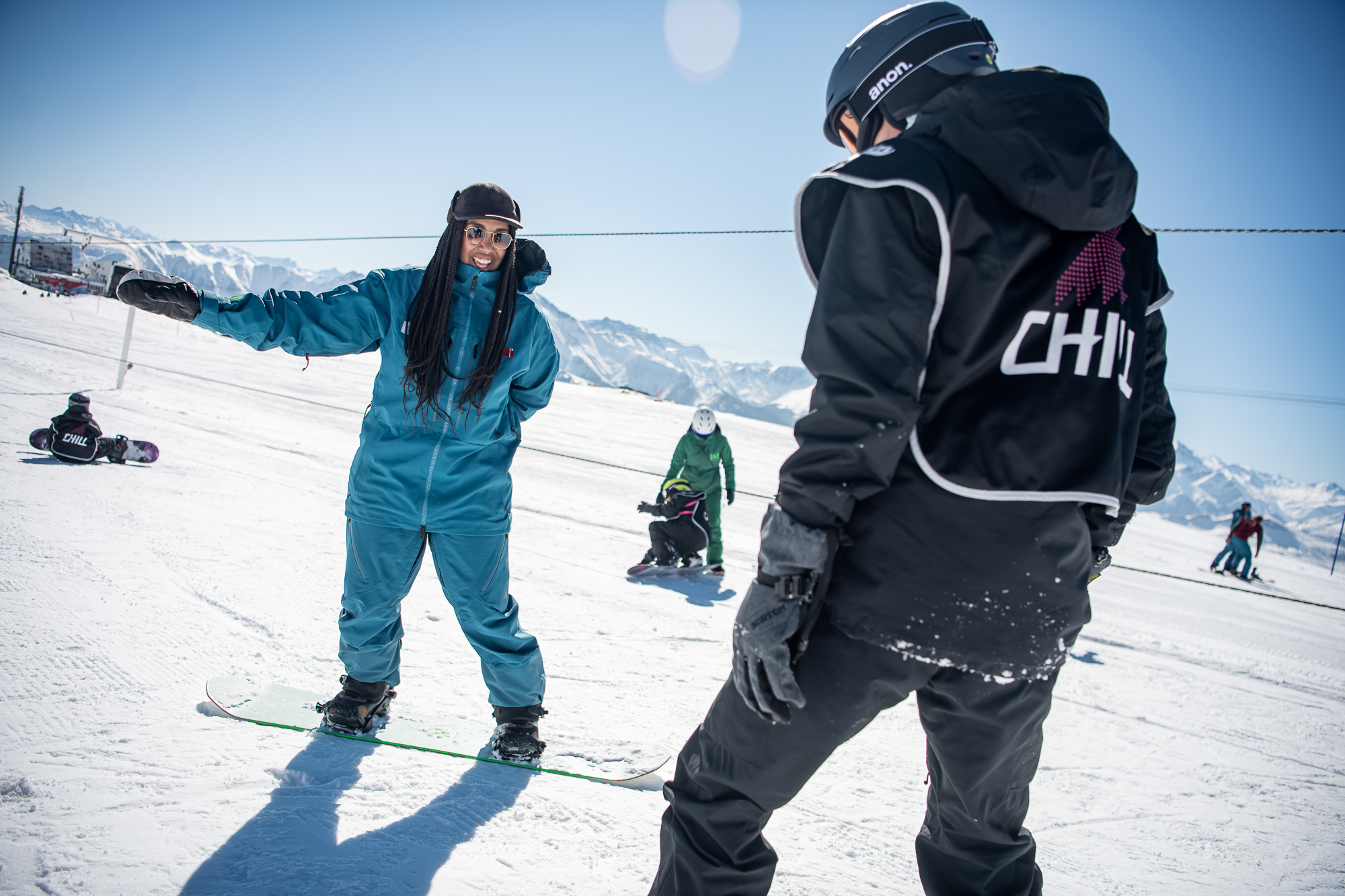 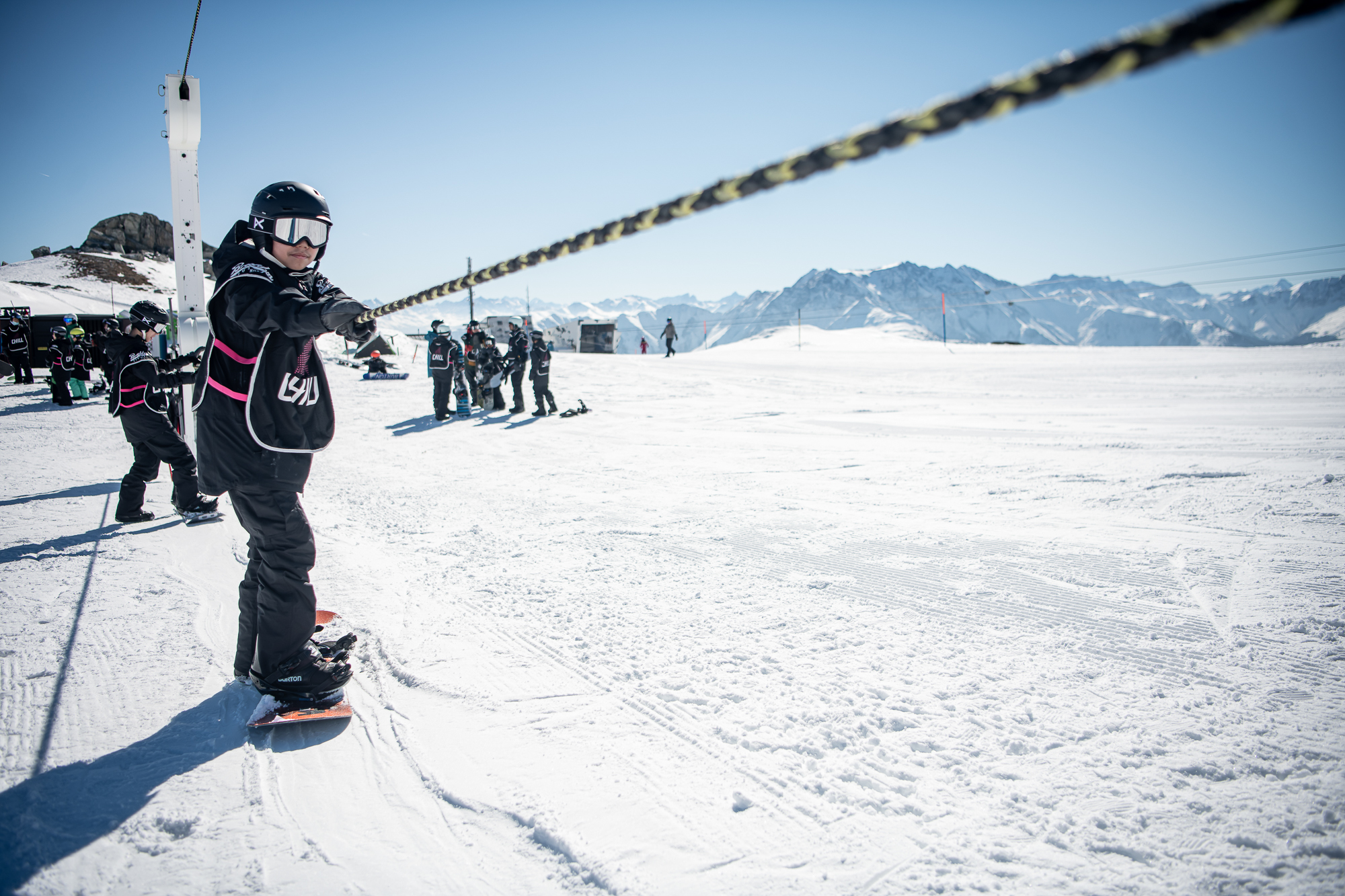 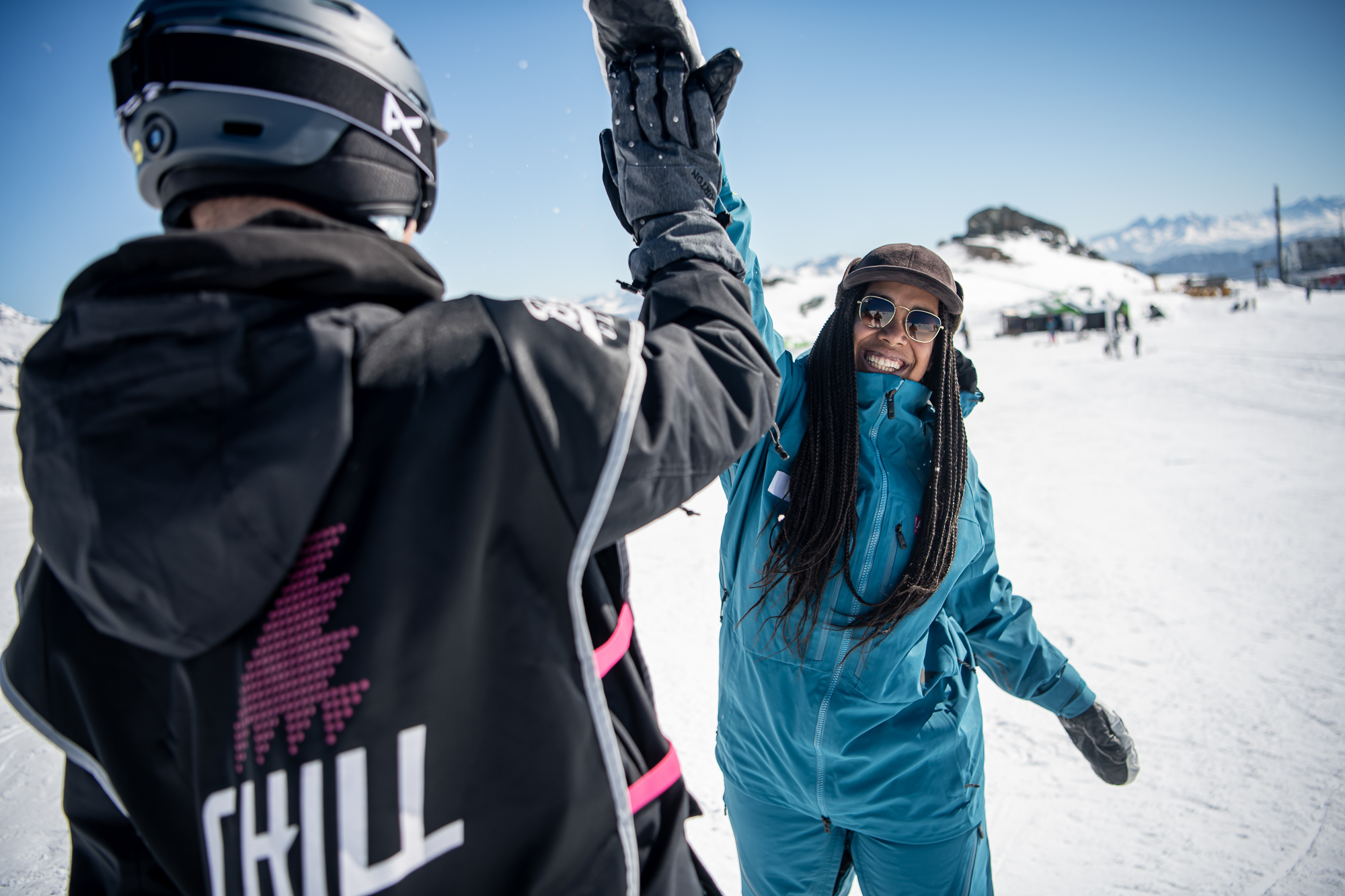 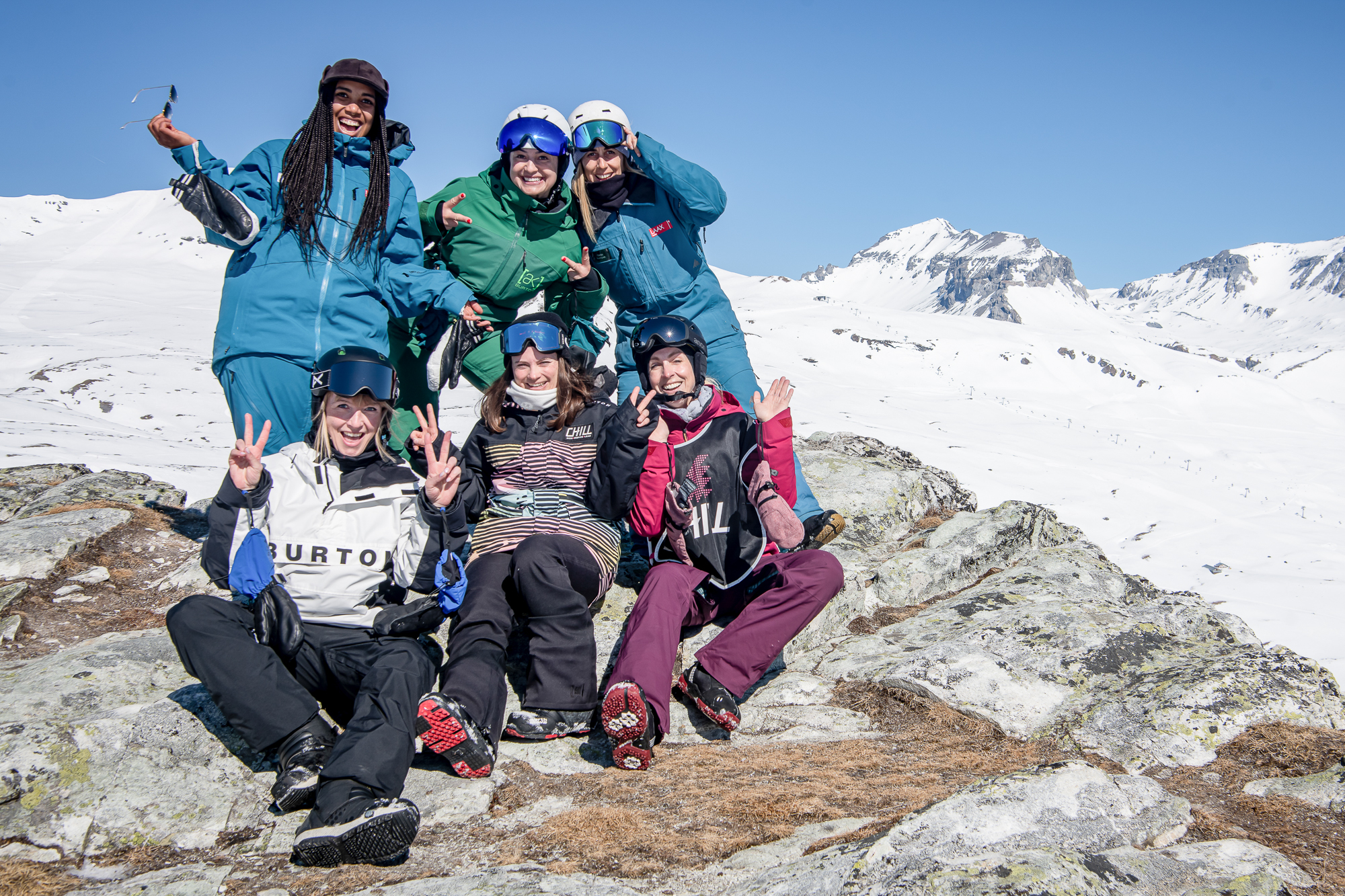 Over the past few years we’ve done a good bit of introspection and started to get hung up on some philosophical questions — Is snowboarding a purely selfish pursuit? Is it just another way to feed our egos? Is it anything more than an escape from reality, fueled by rich kids and corporations?

For more insight, we teamed up with Nytaï Aidlin, a young rider from Geneva with a lot of questions about snowboarding’s ability to address society’s challenges. The result is a series of interviews with people who run organizations that are focused on making snowboarding, and our world, a better place. His fourth conversation is with Michaela Schmid about diversity and her work with CHILL Foundation…

Hey Michaela! Can you present yourself and your connection with snowboarding?

I grew up in Davos. When I was 12 years old, I did a snowboard weekend course. I was hooked immediately. The cool thing was that in high school we had a lunch break from twelve to four, so I could spend almost every day on the mountain. I am really blessed that I could grow up in a ski resort!

After high school, I saved money to go snowboarding in Canada, and then did an Internship at PopCorn in Saas-Fee where I met Daniela Meyer and everything really started.

So what is the CHILL Foundation exactly? Isn’t it directly related to Burton?

That is correct. Donna and Jake Burton Carpenter founded CHILL Foundation back in 1995. At the beginning, it was more of a, “how to snowboard” program, but soon they started to do more than that. They opened the classes to marginalized youth to offer access to sports such as snowboarding, surfing, and skateboarding at no-cost at all. They also intentionally implemented core values in the educational structure to engage a change of perspective.

A change of perspective through snowboarding?

Exactly. The CHILL program focuses on six life-values: respect, courage, patience, persistence, responsibility and pride. Each day, a lesson is focused on one specific value.

Today, it was about courage. The course started with the bus ride where we did a little group exercise to discuss and reflect on the daily values. We also implemented the core values during the day with warm ups and special snowboard exercises that have something to do with courage. At the end of the day, we encouraged some reflection by asking questions like, “From this experience, what could be transferred into our daily lives? What can we learn from it?”

In many ways, snowboarding reflects life’s challenges. In life, you try and fall. So, you have to stand up again. In snowboarding, it’s just the same. You fall, but you stand up and try again until you make it.

That’s an inspiring way to see snowboarding! Who are the young people that you are working with?

At the moment, we mainly work with youth refugees staying in transit centers. When arriving in Switzerland, refugees stay in a federal asylum center while their asylum request is examined. After receiving confirmation, or after 140 days, refugees are distributed among the cantons to be taken care of in what we call transit centers. Some of them are fully dedicated to minors.

We’ve chosen these institutions because they are probably the ones where the youth will benefit the most from the CHILL program. Also, the centers have their own schools where they can adapt the program for the kids. It was important for us to give them the full experience.

Do you expect that these special snowboard courses will impact these young people’s lives?

That would be nice! It will probably not impact everyone’s lives, but I’m sure that there are some participants who will change their views on certain things. Although it is really hard to make a change happen in such a short period of time, it is actually possible!

Carlos is a great example. He lived in the L.A. area in an environment with a few to no opportunities, one where it is so easy to fall into a criminal path. In 2002 and 2003, he participated in CHILL L.A. and spent 12 days following the program. After that, he was invited by Burton to the U.S. Open in Vermont with other participants from CHILL. These 12 days, plus the visit at the US Open changed many things in his life. Today, he is living in Innsbruck with his wife and teaching snowboarding to his kid! Who would expect such a life path from a young guy from L.A.’s marginalized suburbs?

Meeting him reinforced my belief that it is possible to make an impact with this 6-day program. It may not happen for everyone, but there will be some kids who fully profit from these lessons and experiences.

That is so great. It’s nice to see snowboarders working to make snowboarding more accessible!

Yes, and it is really rewarding. I recently saw the movie Dear Rider, which made me realize how much snowboarding meant to me. I was actually not aware of how much it impacted my life. It made me want to spread the love for snowboarding to other people even more and transmit the passion. By doing so, we don’t only teach a sport, but also a positive lifestyle helping us to navigate life.

Unfortunately, the cost related to snowboarding makes the barriers to entry super high. Luckily, we can count on the great contribution of Laax to support our project. They offer snowboard instructors, material and food, while Burton arranges the clothes and CHILL the overall organization.

There are also other ways to enter the community, through skateboarding for example. Luca Kuppelwieser, who also works on the CHILL project in Laax, recently co-founded the organization Passiun. They want to help refugees integrate in Switzerland through skate classes in Laax. That’s such a great initiative!

If you don’t know someone who is passionate about snowboarding or skateboarding, it is hard to get into the sport. I hope that with CHILL, we can be this gatekeeper to more and more kids and make snowboarding more diverse.

That is indeed an important topic. I am impressed by the diversity of people that you are introducing to snowboarding: Afghans, Turks… It inevitably brings the following question: Is there a problem of diversity in snowboarding?

If you look at the Swiss mountain communities, the people are mainly white. If you look at the pro riders and snowboard teams it’s the same. And we also have the gender gap… but that is the same all over the world. Back in the day, it was Italians coming to Switzerland. Nowadays, it’s people from Ukraine, Afghanistan, Syria, or African countries. There will be more of these changes in the future.

It is a fact that diversity in snowboarding is not as good as it could be, but it also goes back to the connection that you have with snowboarding. Does everyone have the opportunity to snowboard? Is everyone even interested in joining this community, and learning how to snowboard?

Sometimes the answer is yes… An example of that is Arlinda, one of our volunteers with CHILL Switzerland. She was a refugee from Kosovo when she arrived in Switzerland at the age of 5. She was lucky to be introduced to snowboarding, and today she’s giving back here with CHILL!

From refugee to a snowboard enthusiast, that is inspiring!

With that in mind, I personally don’t see the lack of diversity as a problem in itself, but more as a point of development. With CHILL, we work on offering everyone the opportunity to join snowboarding if they believe it is something for them. In the end, the snowboard scene also benefits from being more diverse. It gives a great example to the world for how we can include people, instead of excluding them.

Do you think that more can be done to diversify snowboarding?

Something truly special and great about our community is its open-mindedness. But at the same time, we live in our bubble, a sort of happy land where we think that racism doesn’t exist. Systematic racism exists in underlying ways, even in our community.

I think that CHILL really raises awareness for those topics. Since I work with them, I am more aware of the question of diversity and what it means to bring someone new to the mountains. If we cannot change the world, we need to at least encourage people to give this topic a thought.

Thanks for your time and great insights Michaela. I hope you’ll continue to have a lot of success with this program!

No data was found